Te Rau Aroha Marae is the world’s southern-most marae. Located in the small town of Bluff, the marae was originally establi

shed in the late 1800s as a hostel for local Māori who lived on islands off the Southland coast. 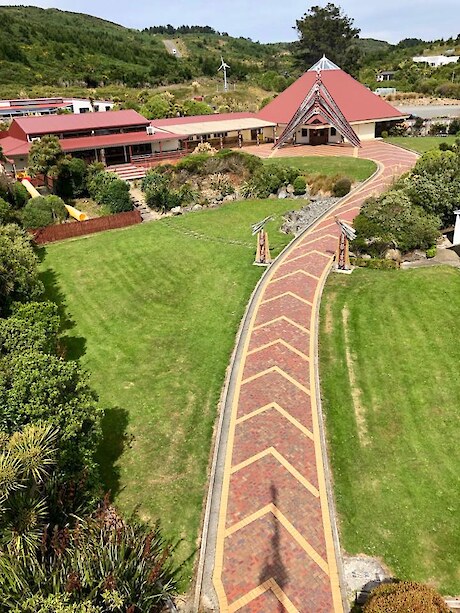 The marae was developed in 1985, but the tīpuna whare, Tahu-pōtiki, which takes its name from the ancestor (tīpuna) of the local tribe, Ngāi Tahu, was opened in February 2003.

Prior to the establishment of Te Rau Aroha in 1985, Māori from the Bluff/Awarua area used Waitaha Hall on Barrow St before the space became too small.

It was the vision of community leaders to have a marae on Bradshaw St and after fundraising, the dining room for Te Rau Aroha, Thompson said.

It was named Te Rau Aroha after the canteen truck that delivered food stuffs and mail to soldiers in World War II.

Work on the design for the wharerau, mostly designed by Whiting, began in 1999.

Local kaumātua helped to build the meeting rooms. The maihi (mast) at the marae represents the three mountains, Aoraki, the tallest mountain in the southern alps, Tākitimu mountains in southern Fiordland, and Motupōhue, Bluff Hill.

The kōruru (carved head) within the maihi of Mount Aoraki is of Aoraki whose waka became the South Island in Māori mythology.

The maihi of Tākitimu includes the kōruru of Tamatea Pokai Whenua, a great traveller and descendant from the Tākitimu waka.

Within the maihi of Motupōhue includes the kōruru of Tahu Potiki, a former Ngāi Tahu leader.

The tekoteko within the maihi includes Waitaha, Kati Mamoe and Uenuku, atua (god) of the rainbows.

Artwork on the inside of the marae celebrated mana-wāhine representing the Māori woman who married pākeha men.