Terry is the Manager of Hokonui Rūnanga and the Programme Director for Murihiku Regeneration. Terry has been involved with Hokonui Rūnangaand has been the Hokonui Te Rūnanga O 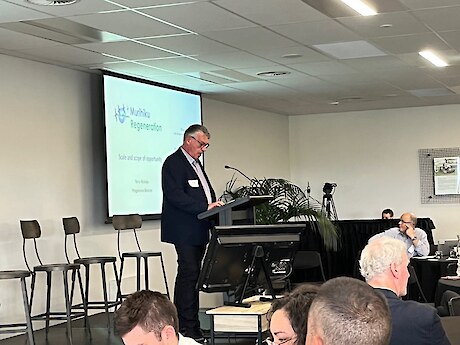 Terry Nicholas, Programme Director for Murihiku RegenerationNgāi Tahu representative since January 1999. His special interest is building succession out of settlement - “mo tatou, a, mo ka uri a muri ake nei”. Terry is also a member of the Just Transition oversight group, to ensure the rights and interests of Murihikuhapū are being represented.

Terry works tirelessly to protect and enhance spiritual, cultural, organisational, educational and economic aspirations of Hokonui Rūnanga and Murihiku Regeneration. His vision for the future is for Hokonui Rūnanga to be a leading organisation, well positioned back in its role where it has been absent for so long. Tiwai Point has a rich cultural history, and Terry has a deep passion to have the area remediated and reinstated. He is a descendant Captain James Joss, a whaler who previously owned the land where the existing smelter is located. This land was allocated in customary terms by Tuhawaiki paramount chief of Murihiku.