How Hokonui Rūnanga are working to restore kanakana numbers 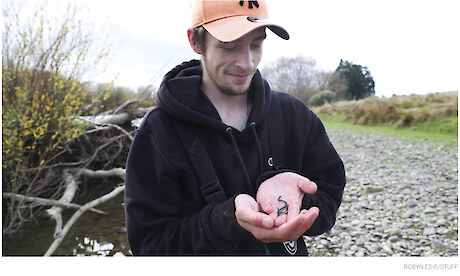 Cadet Josh Aitken was thrilled to find a Kanakana (pouched lamprey) during tuna eel monitoring on the Mataura River. The species is considered nationally vulnerable.

He is carrying out monitoring work on the Mataura River and has just caught a brilliant silver-blue juvenile kanakana (lamprey).

Freshwater ecologist Matt Dale beams as he inspects the tiny creature: “This is real special.”

He has never seen one upstream from Te Au-Nui (Mataura Falls) and says it means the work that Hokonui Rūnanga are doing to restore the river is working.

“It means they’re getting past the falls,” which look very different today, surrounded by industry.

The taonga species was once abundant throughout New Zealand and numbers were so great at the Mataura River, South Island Māori would travel from as far as Ōtautahi (Christchurch) come harvest time.

In the past, these pouched lamprey have been found as far north as Piano Flats – some 85km away from the falls.

But as the nutrient composition of the streams and tributaries they live in have changed and as habitats have been lost, kanakana have become a threatened species. 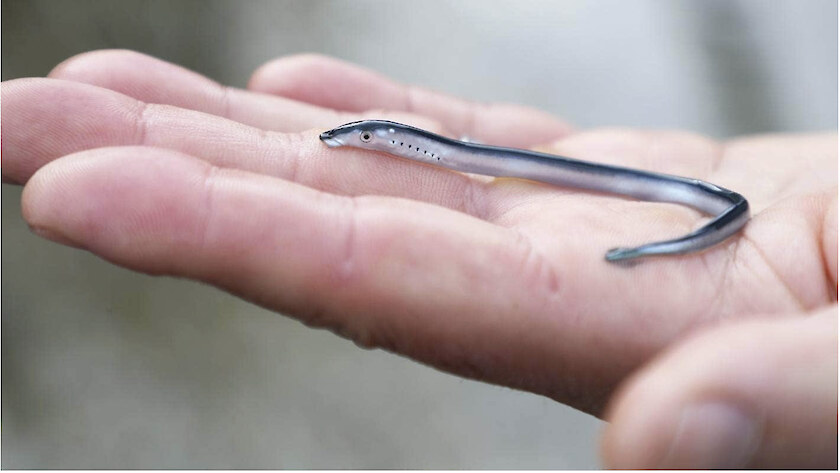 Kanakana turn a silver-blue colour when they are ready to migrate out to sea where they live as parasites to marine mammals.

Hokonui Rūnanga Kaiārihi Taiao (Environmental Lead) Riki Parata could not say for sure that the mahi his team were doing was a direct contributor to the find. 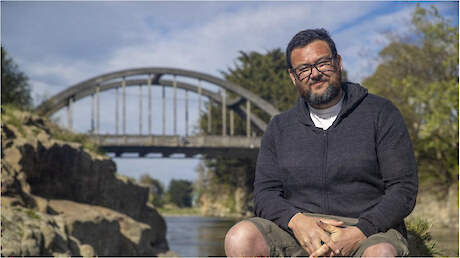 Hokonui Rūnanga Kaiārihi Taiao (Environmental Lead) Riki Parata says kanakana are one of those “secret species” that many people have not heard of. Scientists still have much to learn about them, he says.

It has only been in the last few decades that numbers have dwindled, Parata said.

“I remember when I was a child, we used to catch sacks full.”

The Mataitai Reserve at Te Au-Nui was the first of its kind when it was established in 2006 and the rūnanga now have agreements with businesses either side of the falls to make sure the area is safe for kanakana.

The Taiao team are working with the National Institute of Water and Atmospheric Research and Alliance Group – which operates a plant on the river – to build a bridge for kanakana to help them move over the weir at the falls.

The species breed in freshwater, head out to sea as juveniles, and then return when it’s time to spawn.

Te Au-Nui used to be wide, but industry has narrowed the river at the falls, making it difficult for the kankana to get up.

In the meantime, Parata and some kaumātua have been going out physically plucking the lamprey off the falls and take them to the other side, he said.

“But we can’t be there all the time.”

For the past two years, it’s been trapping and transferring juvenile eels with the hope of having a permanent solution in place by next season.

In the next migration season, they will be tracking migrating tuna (eels) with microchips to see if they are going into the hydro turbines on the river – which will give the team an idea of the impact the weir is having on their migration patterns.

“They’re the ones that go out to sea to breed, and the babies come back up [the river] again. We’re involved in the whole cycle, trying to just maximise the numbers.”

The team have also been monitoring kanakana over the past two years.

Monitoring the species in the river would help the group understand where it needed to focus efforts to reduce its impacts, he said.

“We have undertaken a significant amount of work with them in recent years, as well as the commencement of a Kaitiaki Plan to enable continued collaboration into the future,” Wiese said.