In what is thought to be a New Zealand first, school pupils have made a passionate plea to the Environment Select Committee, asking it to save the Waiau River that flows through their community.

Pupils from of Hauroko Valley Primary School and Waiau Area School in rural Southland travelled to Wellington to present their Kaitiaki Project to the Select Committee, alongside members of the Waiau Rivercare Group. 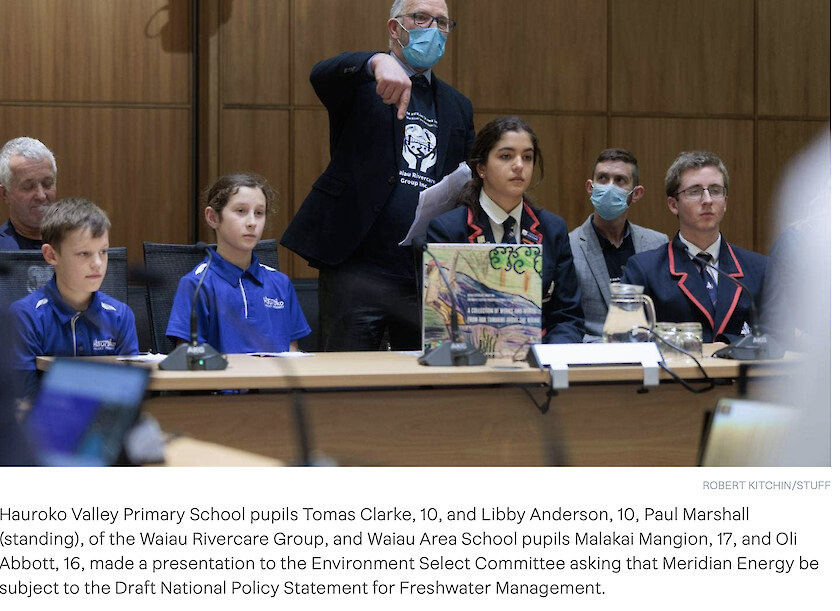 The group’s presentation asked that the House of Representatives urge the Government to remove the exception for the Manapōuri Power Scheme from the Draft National Policy Statement for Freshwater Management.

They want Meridian Energy to increase water flows in the Waiau River, instead of diverting it to the power scheme, to stop algal blooms and return the river to a state of ecological health.

Libby Anderson, 10, Tomas Clarke, 10, and their teacher Jen Templeton, of Hauroko Valley Primary School, and, Malakai Mangion, 17, Oli Abbott, 16, and their teacher Richard Bennett, of Waiau Area School, presented the project, an ecological inquiry by more than 120 children and young people sharing their thoughts, feelings and values for their river.

Libby told the committee that their community all love the Waiau River “but we’ve lost it, but we want it back”.

Malakai and Oli said the community all relied on the Waiau, but now the Waiau was relying on them.

“We, as the young people of the Waiau, cannot share the same carefree experiences that generations before us have. Today our relationship with the Waiau involves checking online for the swimmabilty rating of the river, reading didymo signage at the Tuatapere Domain, and smelling and seeing thick slimy sludge and other sign of bacteria suffocate the beating heart of our catchment,’’ they said.

Environment Select Committee chair Eugenie Sage thanked the group for the mahi that had gone into their Waiau taonga project, and their presentations, which she said were ‘’very compelling’’.

Under the Government’s package, the hydro-electric scheme, which generates power for the Tiwai Point aluminium smelter, would be exempt from freshwater management requirements to support renewable energy targets.

The Manapōuri Power Scheme, which is owned by Meridian Energy, removes water from the Waiau River catchment and discharges it to Deep Cove in Fiordland after it has been through the power scheme.

Earlier this month Waiau Rivercare Group co-chairman Paul Marshall said the power scheme takes 95% of the river’s flow, leaving the lower Waiau with 5% of what its flow used to be.

“The ongoing environmental, cultural and social effects are significant, and dire, and makes the Waiau unsafe to swim in. This exception removes our community’s voice for the Waiau River for the next 50 years. To be heard, hydro must not be exempt from the Policy Statement,’’ he said.

As well as presenting to the committee, the pupils had a private tour of parliament, seats in the public gallery, and use of the personal suite of the Speaker of the House, Trevor Mallard.

The group had to fundraise to get to Wellington, and also received a grant from the Parliamentary Travel Fund.