The Dame Tariana Turia Award is for contributions to Whānau Ora (Whānau Wellbeing) at individual, group and organisational levels. 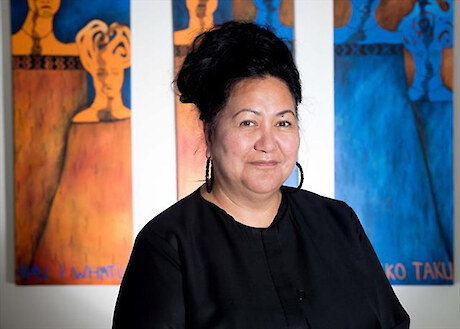 I was born in Tuatapere in Western Southland, one of the first babies born in the newly opened Maternity Home in the late 1950s. I was what was termed back then a ‘blue baby’, my mother was told to take me home and keep an eye on me. Not many blue babies survived back then but I did. I am the number two daughter with 8 other sisters and two brothers who are the eldest.

My mother was from the Wharetutu and Potiki whānau and my father in his 90s is the oldest surviving child of Rapana Tamarapa and Koi Mirimiri from Taranaki, having arrived with a group of other Māori men to work at Ocean Beach Freezing works in Bluff and then Makarewa.

My father worked seasonally shifting into other labour-intensive work while my mother worked extraordinary hours often arriving home just in time to begin breakfast and the usual home keeping that waits for many working women.

My parents were hardworking people yet according to state documents my parents were “neglectful and lazy” us kids “without proper control”. Add a generous dollop each of racism, state power and the legal apparatus to enforce and we have a ‘perfect storm’ for the wholesale uplift of Māori children into state care.

Years later on receiving my records I found an entry where I had indicated a desire to go to university. The comment was insightful to me even back then, “Donna has aspirations above her station in life”. Later I was to hear that comment often only it became, “she is too academic”, “too educated”, “not Māori enough”, “privileged Māori woman” and all those other terms that are designed to put me in my place.

Being in state care taught me hyper-vigilance, education gave me the tools to interrogate what counts as “in our best interests” and my whānau reminds me every day about the utility of ‘transformation” in their lives. My mother Doreen was a formidable woman and taught me a healthy disdain of what she called “flash people”, government and do-gooders. My father Michael, relishes living alone where privacy is his last bastion of dignity. He taught me about the importance of mana motuhake – self-determination is extremely important to him as he politely declines offers of assistance from non-kin.

My great grandmother Eliza Potiki signed the suffrage petition on Rakiura and was a member of the Women’s Christian Temperance Union. My grandmother Pani Cross advocated for ‘ladies bars’ in pubs as she was concerned about men returning home with reduced pay packets during the period of the six o’clock swill. My mother was a union representative and an advocate for employees. While all working on different kaupapa, their agenda was to improve the lives of whānau. Despite the chaotic intervention of the state into their lives, these women often took a stand against the popular trends of the time.

I am a proud mother when I see my children at the start of their life journeys, taking up leadership positions in our own indigenous institutions. I see their struggles, nothing has changed, they are struggling against the racism of mainstream services that confronted me nearly 30 years ago, at times with the same characters. The state has fed an industry of services that were built on the backs of successive generations of Māori whānau, neither the state nor the NGO sector will give up this monopoly easily.

What they will offer us is a trojan horse, the opportunity to ‘co-chair’ their organisations. Not co-own just be at their table. We remain at risk of withering on the exotic vine of ‘biculturalism’ as pressure to partner with Māori increases. These are cautious times as well as times of great opportunity for whānau to design the systems responsible for building both environment and infrastructure that promote mana motuhake.